The New Moon on Monday February 4, 2019 at 15° Aquarius is very fortunate. The New February 2019 astrology is the best of any moon phase for over a year. Sun, Moon and Mercury sextile Jupiter bring good luck, good news, optimism, generosity and happiness.

The February 2019 new moon also sits at the midpoint of Saturn sextile Neptune to bring spiritual wisdom and help make your dreams come. This is a generous, charitable and philosophical new moon of hope and goodwill.

A new moon represents the end of one cycle and the beginning of another new 28 day cycle. Sun conjunct Moon gives an invigorating burst of energy and initiative. So this is an excellent time for making a fresh start, turning over a new leaf, or starting a new project. You can also question old habits, behaviors and beliefs as you search for new and inventive ways to make progress.

The effects of the February 4 new moon will last four weeks up to the March 6 New Moon. The best time for making a fresh start and for beginning new projects is during the first two weeks of this new moon cycle. This waxing phase of the Moon lasts from February 4 to the February 19 Full Moon.

The February 4 new moon at 15°45′ Aquarius has a positive influence because it is conjunct Mercury and trine Jupiter. So it brings optimism, generosity and a philosophical outlook. The new moon at the midpoint of Saturn sextile Neptune increases spiritual awareness and understanding.

There are no major fixed stars conjunct this new moon. But I will discuss the minor stars in Delphinus Constellation after describing the most important planetary aspects.

The new moon conjunct Mercury brings a focus on thinking and communication. The new moon sextile Jupiter adds hope, goodwill, generosity and happiness. Opportunities for material and spiritual growth can increase your wealth and bring success and contentment. The orbs for these two aspects are not particularly strong but they combine as Mercury sextile Jupiter, which is strong at only 1°32′.

Mercury sextile Jupiter gives positive thinking, a broad outlook and good decision-making skills. You can clearly visualize the preferred path ahead to plan your future. Good communication skills and open self-expression improve relationships. This is a good new moon for socializing and making new friends and business contacts. Diplomacy and tact are helpful for business negotiations and legal matters.

The easy uptake of ideas and good concentration mean you can study or sit exams with less stress than usual. You could also increase your general knowledge and expand your horizons through travel and adventure.

Good news and good luck can increase your level of happiness and satisfaction. This new moon should foster cordial political and religious discussion. Social and humanitarian causes should gain positive media attention.

Saturn sextile Neptune brings material gain from spiritual pursuits. You can make your dreams come true with hard work and a sensible, realistic approach. You will understand your own limitations but be optimistic at the same time.

Spiritual wisdom brings the patience and self-discipline to sacrifice short-term gratification for long-term success. You can also help make other people’s dream come true through practical help and spiritual support.

New moon February 2018 is ideal for self-reflection, dreaming and meditation. You could make prayer and ritual part of your daily routine. Devotion and service to others will bring satisfaction and contentment at the spiritual level. 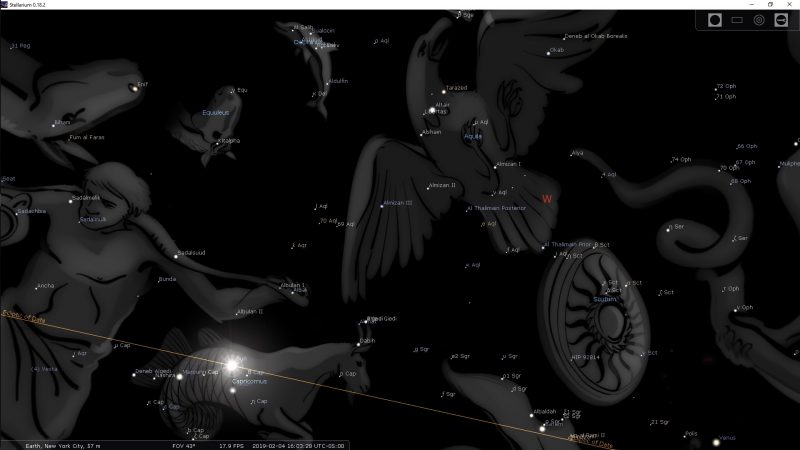 When our Zodiac was invented over 2000 years ago, the Signs roughly aligned with the Constellations from which they were named. But the precession of the equinoxes has moved the Signs backward relative to the Stars by over 27°, or nearly one whole Sign.

New Moon February 2019 is conjunct two stars in the minor constellation of Delphinus the Dolphin.

Delphinus gives cheerfulness, pleasure, travel, and love of hunting and sport in general. But also little happiness, dissembling and duplicity, and danger of suffering from ingratitude. [1]

The Dolphin is the sky emblem of philanthropy. It denotes an individual devoted to his children and of a very religious nature. The constellation presages good fortune in regards the sea. [2]

New Moon February 2019 conjunct asteroid 29 Amphitrite may not add so much to the astrology but it sure is interesting given the close association between the Dolphin and Amphitrite in Greek mythology.

Amphitrite was a sea goddess and the queen of the sea. Once upon a time Poseidon saw her dancing in the waves and was so turned on he proposed to her. But she was shy and fled far away to preserve her virginity. So Poseidon sent his messenger the Dolphin to find her and persuade her to marry him, which he did, and they all lived happily ever after.

Archeia Faith always knew she was here for a reason, to change the Planet somehow, following her heart she travelled through 53 countries until visions and dreams lead her to the front door of Mother Of All Creation, Prime Creator Source, who is here in the physical to Ascend the Planet! Now living in Heaven Consciousness alongside God, the rest of the First Contact Ground Crew Team and All of Creation, she works with Mom to Ascend the Planet.

Stay Connected with US

LoveHasWon Campaigns for the New Earth!

Our Woodwick Candle Collection is made with pure l

Our Colloidal Silver is a spiritual and medicinal

The Rose Quartz is a stone that emanates the energ

The Unified Field of Mother God is the most powerf

Love Beings in The Present Moment of Now with LoveHasWon

Send Us an email and We'll get back to you...

Ready to Take The Next Steps? Book Your Incredible Spiritual Intuitive Ascension Session

Ready for the Next Step? Schedule an Amazing Spiritual Intuitive Ascension Session

Stay Connected With Us

This is a Once in A Lifetime Opportunity. Mother and Father God will be able to speak with each BEing for 5 minutes and will etherically perform All guided, necessary Surgeries. The Session will include an entire Ascension Assessment performed by Mothers Fully Trained First Contact Ground Crew Team that will prepare you entirely for the full Ascent to Divinity, ensuring you know exactly how to raise your vibration to Heaven Consciousness.

Raffle to be picked on New Year’s Eve!

A total of 5 boxes to be auctioned

Funding to go toward buying land and laying foundation for the first crystal school.

This box is worth 10 million dollars or more, priceless gifts from prime source creator and an example of her giving and love pushing to bring all children home.

Donate Below and mention in the note “Ultimate God Box Raffle!”

Use Cash App with Our code and we’ll each get $5! FKMPGLH
Cash App Tag: $lovehaswon1111
Cash App